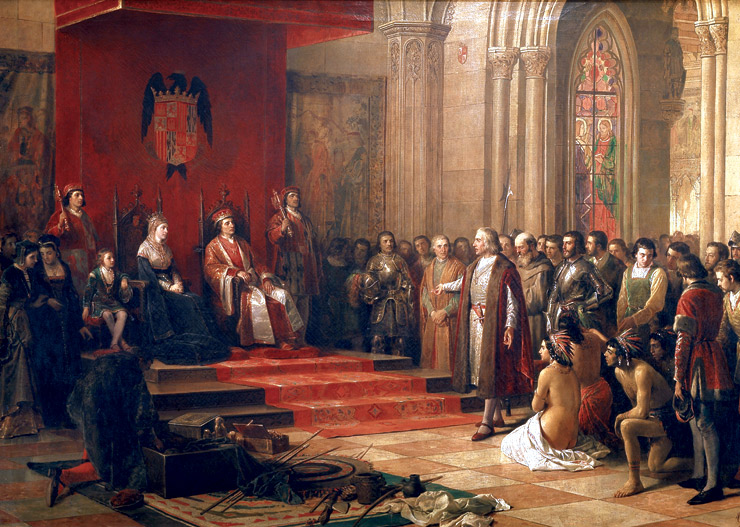 Initially I thought Siglo de Oro was a “Seal of Gold”. I was wrong: It translates to “Golden Age”, “Golden Century”. A Golden Age it was indeed: The Spanish colonization of the Americas was by far the most extensive and impressive and given its head start (Columbus sailing west) it was also the longest: The Spanish colonial empire, starting 1492, lasted until 1975. Quickly after Columbus made landfall in the West Indies, the Spanish had conquered the Incan empire in the south and the Aztec and Mayan realms in Central America. All this is even more impressive since the Spanish had just reclaimed their homeland from Moorish rule in the very same year 1492. Read more about the Reconquista in the Into the Renaissance Spain Strategy (Deity) guide.

Over centuries the Spanish monarchy managed to not only be a major player in Europe, but to establish an empire where the sun never sets. As early as June 1494 the Portuguese and Spanish had split the globe into two hemispheres with the Portuguese claiming the land between Brazil in the West and present day Indonesia in the East and the Spanish gaining exclusive rights to establish colonies anywhere else, ranging from west of Brazil to the most eastern islands in Asia.

The AI in this scenario is dominant as always. So as usually we need to defeat the main AI players as early as possible.

Now in Conquest of the New World, European Nations can not declare war on each other until the discovery of Piracy. This means in order to get the Siglo de Oro, you need two things:

The initial build order shows exactly that focus on Production improvements and right after only units:

This build order pretty much guarantees to by turn 54 have an army of:

After conquering Portugal, this grew to 7 Frigates and 6 Privateers, so +30%.

Seville will grow even more once Lisbon falls

Gold bonus for discovering a Natural Wonder (Bonus enhanced if first to discover it). Culture, Happiness, and Tile Yields from Natural Wonders doubled.

This bonus is great: You’ll most likely discover at least 2-3 natural wonders and will receive around 1000 Gold. In my game I bought a seaport further improving production in Seville, thus speeding up the European conquest.

Timing is essential: First getting the production bonuses is great for building the army. Only then adding City Sack and Ransom supports the European conquest.

With the army listed above it was as planned super easy to gain my Siglo de Oro by conquering the European capitals. Already in turn 52 I declared war on Portugal. Lisbon fell in turn 58, granting more land for Seville. A fact that will make Spain and Portugal more powerful when you play them and conquer the respective other.

Making peace with Portugal turn 59 I headed straight for England: I picked them next, because with their unique ability, making their navy even more powerful they had to be taken out as quickly as possible. They already were on a good way building their navy so it took several until Plymouth got captured (turn 65)! It granted me another 3 treasures (so 3x 25VP and 300G). In the peace deal in turn 67 I only got 9 Gold per turn.

Peace with Netherlands whilst attacking France

Before heading for the Netherlands I needed to ally their cultured City States for the Culture boost. Taking this time was okay, since shipping to the Netherlands always takes a bit longer due to the English Channel protecting them from big fleets. After healing all units and bringing them in position, I declared war in turn 70. Amsterdam fell in 2 turns (71) and in turn 76 we had peace.

During the peace negotiations with the Dutch, war with France was already going on: La Rochelle fell in turn 78. War with France was going on for some longer as France already had quite some colonies on the other side of the Atlantic.

Playing Spain, Europe was liberated only in turn 78, some turns later than in the France game. Still: With Seville getting stronger than any other European capital due to taking the tiles from Lisbon, this will be the most successful playthrough of the Conquest of the New World Scenario!

Having a Northern Archipelago is the best that can happen: All cities are accessible by our battle fleet. In this game, I took one French city, made peace, healed and went for the Dutch cities. In a peace treaty I demanded their continental cities (because they’re harder to conquer). Then I went for France and England again and after 10 turns declared war on the Netherlands for the third time. Capturing their last northern city, I demanded their second-last continental city, leaving them only a tiny naval base easily conquered in the 4th Spanish-Dutch War.

Other than playing England and France in the first two European games, I won’t provide a detailed log of the conquest. It’s very individual per map anyways, so I’ll just use the following gallery to highlight some of the main aspects like:

Bribing the Aztecs vs other Natives

Bringing the Fleet in position

Veteran Ship of the Line: 4 Range

From my first war with the Inca I got 11 GPT for making peace. The Shoshone gave me 24 GPT. I used only a fraction of it (7 GPT each) to first bribe the Aztecs against the Maya (whose capital I took in turn 113) and later against the Iroquois.

With Veteran Ships of the Line (Range 4 and Logistics) I was able to bombard all their cities, even those 5 tiles inland, from a coastal city on hills. This and a good rotation of ships dealt with the Iroquois army very quickly.

Same worked for the Shoshone, who until late in the game lead the scoreboard. But even their powerful navy fell victim to my veteran Privateers and Ships of the Line.

Eventually playing Spain I got the highest score of any Conquest of the New World games so far: Almost 8000 VP!

This last European Steam Achievement playthrough for Conquest of the New World went super smoothly. Other than playing France I never was worried about having enough time to score VP. It worked and it’s been fun as usually. Challenging? Not so much. The amazing 7900 score shows as much! 🙂

The strategy is proven. Most likely the Netherlands and Portugal matches will only result in image galleries.

Comments, feedback? Please express yourselves below!