Into the Renaissance – Ayyubids Strategy (Deity) 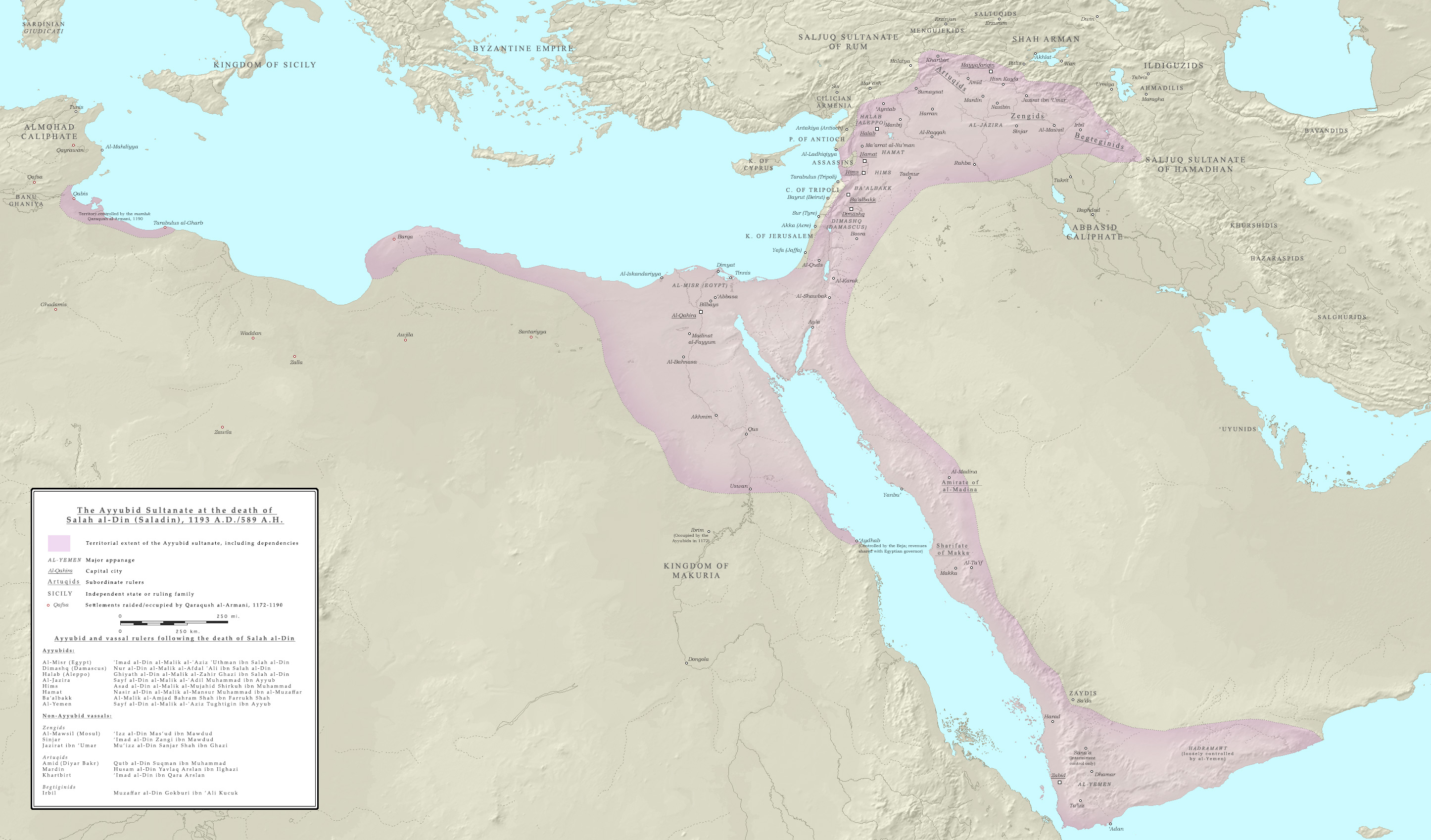 The Ayyubids were ruling the Holy Land during the time of the crusades. Their empire stretched from Aleppo and basically modern day Syria in the Northeast to Libya in the West and the holy cities of Islam in the Southeast. Now playing the Ayyubids in the Into the Renaissance Scenario means reestablishing the Ayyubid empire and requires century long war with the Turks in the North, as Aleppo is their capital and they strive for dominance in the Holy Land.

Also unlike the real Ayyubid Empire, you will hold the Holy Land and (as an unfortunate downside of the scenarios mechanic) no crusader will ever set foot in your realm!

The Ayybids have an awesome unique ability: Saladin’s Justice grants you a free (!) Courthouse in each captured city. This is great in so many ways: It saves tremendous amounts of cash not buying them or immediately gives you the happiness bonus you wouldn’t have if you’d build the courthouses. Also: No maintenance costs! In the end I had ~30 cities, about 25 of them captured, so saved ~100GPT on maintenance.

Given Saladin’s Justice plus all the Social Policies (see dedicated section) my happiness rating was always between 20 and 35 depending on how many cities I had just conquered. Only in the very end with HUGE Constantinople and Nicaea (both cities of 13-15) revolting, my happiness was “only” 1-3.

Playing Into the Renaissance Ayyubids has one big advantage and disadvantage together: You’re in the far Southeast corner of the Into the Renaissance map. The good thing about this: You’ll have only two fronts and don’t need to defend everywhere. The bad thing: You’ll only score victory points (VP) very late in the game, as you’re Muslim and the Turks, your first big rival, are too.

The Ayyubids have several advantages here again: You can go Honor very early on, because you don’t need to build many cities early. Also happiness is less of a problem compared to other nations, because the City States you capture provide luxury resources early on. So here’s my order of Social Policies:

Cairo builds a watermill (one of the best early buildings, as it boosts both growth AND production) followed by 3 Composite Bowmen. Those plus your swordsman will need to stop the Turks from capturing Jerusalem.

After that – find the balance between units and improvements. I built two catapults to support my own siege of Jerusalem. These became the veteran cannons (all possibly promotions) laying siege to Constantinople.

Have one worker build a road to Jerusalem immediately. You’ll need to get your troops there as fast as possible. You might even connect to the city already, but definitely build a road south of it, out of their border. This way you can rotate archers and melees even whilst at war with Jerusalem and fight off the attacking Turks.

Chapter 2: War with the Turks, Jerusalem and Mecca

With those early units it’s vital to both prevent the Turks from capturing Jerusalem and destroying, pausing their early army marching for you. In my game I left Jerusalem alone, even tried to stay out of their territory as best as I could whilst killing Turkish units.

Once the initial onslaught was fought back, of course you go for Jerusalem yourself! I mean: The catapults are in place, the Composite Bowmen are at the ready, a melee unit for the capture: Low hanging fruits, guys, low hanging fruits.

Jerusalem grants you 20 VP per turn. But to not lose sight of the other nations in the leaderboard you have to also capture Mecca. Decide based on the situation: Leave some units at Jerusalem to defend against incoming Turks – but take a big enough army to Mecca. They’ll kill one of your ranged units every 1-2 turns, so march in all at once. From the turn you have Mecca you’ll get a nice 40 VP per turn for the remaining (in my case 160) turns, so 640 VP in total.

For this one you might want to check out the Into the Renaissance Map. Of course you might build loads of coastal cities and try to sooner or later build a fleet. I didn’t do that because land warfare was enough for me. No need to expose yourself to the MIGHTY fleets of Byzantium, the Turks, Spain.

Social policies during the expansion

So I founded 4 cities in Northern Africa to block the land off from colonizing Europeans. Only the first 2 were coastal cities, but at least both with only 2 ocean tiles (so only 2 Privateers could attack per turn), the other 2 in Libya were 1 tile inland.

As you see in the social policy screenshot, I didn’t choose the Collective Rule social policy. So no free settler and no 50% faster settler production. Cairo is still decently fast producing settlers… You won’t found many more cities and other policies were more important to me at that time.

Whilst you built some settlers in Cairo, the Turks are pushing back heavily. Fight off the attackers, drive them back as hard as possible. Doing so, sacrifice only rookies, save and protect the veterans!!! Mainly your 2 initial catapults (you’ll need at least 2 highly promoted cannons in the end game) and as many veteran Crossbowmen as possible.

After capturing the Turkish city (cities maybe even) between Istanbul and their two cities south of Aleppo you might want to invest a General in building a citadel to support your advance. Eventually they’ll even ask for peace, given you captured Aleppo and maybe even some more cities in Anatolia. Don’t give into this – you must get THROUGH Turkey to attack Byzantium. Remember: Capturing fellow Muslim cities does NOT grant Victory Points.

It took me until around turn 150 until I met Byzantium in central Turkey. By then we had already been at war, since I captured some of their settlers advancing into Northern Africa, but never had met any units. Concentrating my veterans and most of my forces on advancing West, I had to neglect the remaining Turkish cities in the Caucasus area. Me just fighting off their casual advances let to a stalemate there. Also the placement of cities and mountains did not allow for 2 promoted units to bombard the cities per turn.

At this stage of the game you’ll have plenty of veterans in Turkey, so time to send a small army west. I mainly used what Cairo produced. Two melees, one or two Mamluks and at least four to six Crossbowmen are enough to drive your conquest there. Remember to use captured and own workers to support your troops with roads for quicker movement.

Almost all cities you encounter will have a different religion. I captured 2 Byzantine cities (Christian Orthodoxy), 2 Spanish cities and 1 English colony (Catholicism). Beware with coastal cities: The Europeans all have a strong navy, so capture these cities with Mamluks and move out after capture. This way you don’t lose your unit if 2 Privateers liberate the city.

At this point in terms of score it’s not even necessary anymore, but controlling 2 Holy Cities is icing on the cake for any game of Into the Renaissance!

There is exactly 1 hill Southeast of Constantinople from where you can bombard the city with a range-promoted cannon without being attacked yourself. There is another one South of it, but it is subject to fire from Byzantine ships. So make use of that first hill. Protect your cannon at all costs. You need to fire twice for several turns until Constantinople falls. It definitely helps to bribe Austria to war with Byzantium earlier. This way after driving Theodora back to her capital, there won’t be many land-units left coming for you.

Conquering Byzantium should definitely grant you victory. The small cities obviously add up to quite a lot, but only a few big cities quite easily grant you as many VP as holding Jerusalem and Mecca the entire game: Nicaea – 27 population, 675 VP, Antioch – 15 population, 375 VP, Adrianople – 12 population, 300 VP.

Caucasus region at the end of the game

Bosporus region at the end of the game

Northern Africa at the end of the game

Into the Renaissance Ayyubids (Deity) – Conclusion

My last game of this scenario before playing the Ayyubids was quite a while ago. Almost a year actually. I’m again amazed by how much this scenario draws you in! 🙂

Playing Into the Renaissance Ayyubids is challenging and exciting, because very long throughout the game you’ll doubt whether you can make it. Pushing back the Turks takes really long and only after you have a lot of veterans you will see significant progress.

It is a bit of an irony that you have to cut through a potentially friendly Islamic nation in order to get to cities that grant you Victory Points, but that’s how it is. I’d like to know if there was a way to be friendly with the Turks and capture Catholic or Christian Orthodox cities by sea. I doubt it, because you’d need to be very advanced technologically to compete with European navies.

Bottom line playing the Ayyubids was big fun, just as it was playing Almohad Morocco or doing the Mehmet the Conqueror Steam Achievement. Another Steam Achievement would have been nice, but it was great beating this game on Deity anyways. Should you have questions or improvements or just spot a typo: Please leave a comment below!

7 thoughts on “Into the Renaissance Ayyubids Strategy (Deity)”